Hungry For The Feminists 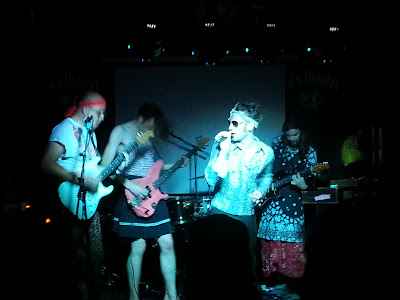 "Do you like live music?" She asked as we settled down for a quiet drink in Cardiff's Ten Feet Tall. Was she trying to sell tickets or simply forewarn us that the bar would soon become too loud and raucous for people of our age?

"Ummm.... Sometimes" was my tentative reply.

"Well there's a gig about to start upstairs if you're interested. They're called The Feminists, they're an all male band from Berlin who wear dresses and sound like the Rolling Stones. Say Hannah sent you and you can get in for free".

Men in dresses? The last time I saw that was watching Bo Ningen play in Sheffield and they were pretty special. So...SOLD. 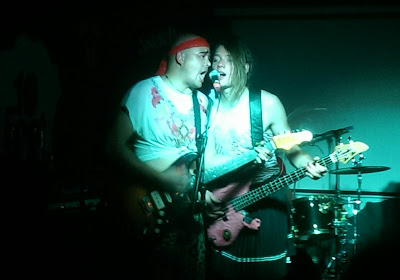 The problem was we didn't have much money and so they'd better be good enough to hold our attention.

It turns out they did more than that...the mild mannered, long haired scruffy looking chap watching the support band whilst drinking a cup of tea transformed himself onstage, superhero like, into the charismatic lead singer Samantha Fuchs as he led his band through a jaw dropping, hugely entertaining set of rock and roll. 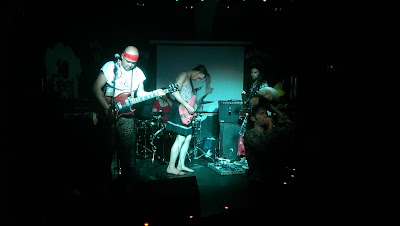 Hannah was right about the nationality, gender and clothing, but this was more hard rocking New York Dolls than Rolling Stones. It's a rare gig that involves the singer, mid-crowd, climbing some stepladders, or a guitarist forcing his cider on audience members and a song about a pine martin (Steinmarder - with a sly nod to Julian Cope's Reynard The Fox perhaps?). 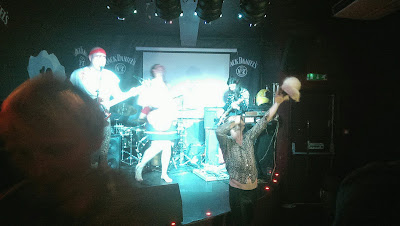 Lacking the necessary funds, I couldn't buy their album on the night so I had to email for a copy, which has just arrived thus morning - glorious pink splattered vinyl that manages to convey the energy of their gigs, with added violin. And as for the sleeve? It's bound to divide opinion but whatever side your on (I'm on the 'I like it' side), it's an image you can't unsee. 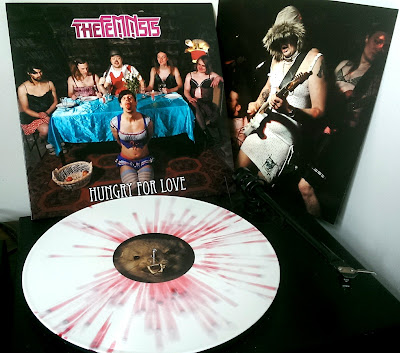